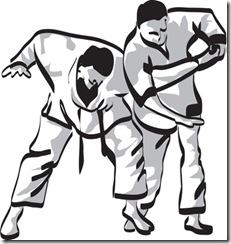 This is a phrase that my ju-jitsu instructor used a lot. And he was right!

Anyone who has reached a respectable level of skill in their art, sport or profession knows that repetition is the mother of learning!

A Premier League striker does not get good by just kicking a ball a few times. He practises the shot hundreds of times per day and well before the match!

In class, we practised a lock, throw or strike many hundreds of times too. The instructor knew that without massive repetition, we would not internalise, refine, fully understand and instinctively own the moves. Our old ineffective ways would still reign and his teaching would have been pretty much wasted.

It was no secret that those who got really good practised outside of class too. And practised a lot!

Boring I hear you say?

This type of seemingly endless repetition can indeed seem boring, especially to beginners.

Stage 1 is to get past the boredom factor. For some, holding onto a vision such as getting as good as Bruce Lee for example, is enough to get them through. For others it just won’t work. And that is why there is discipline and an instructor, the ‘Sensei”, who’s in charge.

Did you know that the Chinese word “kung fu” does not actually mean martial art?

It means, and I translate this loosely, “time and energy applied until one reaches mastery”. (“Wu shu” is used to describe martial art)

For example, one could possess good “kung fu” in cookery.

So my question to you this week is: are you putting in the time, energy and repetition necessary to master the key behaviours in your trade? Are you “paying your dues”? Has repetition become the mother of your learning?

Or are you perhaps still sometimes blaming external factors when you don’t quite achieve desired outcomes?